Image of the Buddha 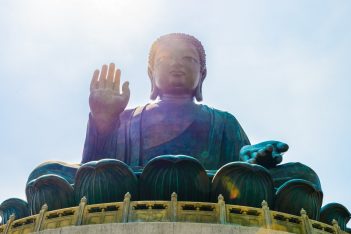 Course name: “The beginning of Buddhism”

During the work on this paper I have read the Sutras:

1) The Sutra with prince Kumara

I believe one can assess the image of the Buddha based on these three Sutras.

Generally speaking, the Buddha comes across as a dignified individual, he is referred to as “The Blessed One”.

Based on the prince Kumara Sutra one might even say his image is portrayed as one of great strength and tremendous power. This is the reason it is mentioned in its beginning that much praise will be given to the person who can disprove the Buddha’s doctrine (verse 3).

I will begin the portrayal of the blessed one’s character, as I see it based on the Sutras, from the image of the teacher. The Buddha teaches everyone, not just his devout disciples but also those who try to contradict him and those who do not adhere to his teachings (as we will see in the following Sutras).

He does not give up on anyone.

While using questions and bringing the disciple to answer them, he finishes each stage with disproving or establishing the answer and then continues, so the final solution or final answer seem to make sense and is welcomed by the disciple (in the end of every Sutra, at least the ones I have read, it is noted how much the monk/prince/disciple was content and happy with the Buddha’s words).

In the Sutra with prince Kumara it is clear how much respect he had for the Buddha.

He served him by himself  and sat by him on a footstool (verse 5).

The Buddha comes across as very compassionate- he knows when, what and who to teach in such a manner that everyone can understand and welcome his words (verse 8).

Moreover, he is depicted as one whose knowledge is infinite in such a way that he can give answer to everyone.

When the prince asks him if he prepares his answers in advance, the Buddha tells him that the knowledge already exists inside and the suitable answer is given on the spot, in accordance to the person asking (verse 11).

I definitely  think it is possible to attribute to the Buddha the ability to give such answers.

The Buddha experienced the truth.

He reached a place where all questions already have answers.

In this place, there were no longer any questions and so when he decided to go back and teach the truth, all the answers were already within him.

Of course, one can get smart and ask how do we know that the words of the Buddha are the truth and that he indeed experienced it? Well, there is no way of truly knowing.

This is where faith or trust comes in.

The Buddha would go even further and say that a person must base his trust on practice- on personal experience and hands-on observation.

The Buddha said to his disciples not to rely on his words theoretically, but to try and experience it for themselves (as can be seen in the Sutra with Bhadali and Kitagiri).

It is imperative to mention this is not subjectivism.

In a post-modern age where the objectivity of matters is determined by how much we connect to them, it will be easier for us to accept the Buddha’s words as subjective, however, it is not the case.

The Buddha said there is only one truth (meaning one path) and a person must make it his own.

A person has a key role in attaining the truth, but he does not create it in his own image.

In the Sutra with Bhadali, the Buddha declares that he himself only eats once a day and thus achieves many good things and asks the rest of the monks to do the same (verse 2).

Once again there is emphasis on the fact that the Buddha speaks from experience.

The monk Bhadali refuses to do so. Only once his friends at the Sangha community implore him, he repents and asks the Buddha’s forgiveness. In return, the Buddha gives Bhadali a whole teaching and leads him to the true understanding of why his actions were improper and why he must obey the Buddha’s orders.

The Buddha comes across as forgiving, and this is due to his compassion.

He wishes to lead his disciple to a place of true understanding of what is right and what is not, and act accordingly.

It should be noted that his forgiveness cannot be taken for granted.

The Buddha puts Bhadali through a long teaching, at the end of which, he realizes the meaning of his actions and his repentance is genuine so his apology can be accepted.

in my opinion, the Buddha accepted the apology because he knew everybody can learn- every person in a different way and in a manner of teaching suitable for him.

One person might take a shorter time to learn, another would take longer.

Each person will require different methods to reach understanding, but ultimately, the potential to obtain knowledge of the truth is inherent in everyone.

The image of the Buddha as a person is inseparable from his image as a teacher.

First and foremost, the Buddha educates his disciples.

He explains to them why they must listen to his teachings and follow them.

he explains to him why this is so.

The Buddha shows him how walking in the path of the teacher, the disciple relinquishes desire and all that is connected to it, thus, when his thought is pure, he may collect knowledge from previous lives and understand the law of Karma.

By meticulously walking in the path of the teacher, the disciple relinquishes his attachment and can achieve liberation.

There is no difference between a person who errors often and one who rarely does- even he who rarely errors and does not fully listens to the teaching, cannot know the truth.

The Buddha demands piousness bordering, in my opinion, on fanaticism. Though perhaps, in order to fully follow the teachings and achieve results, this fanaticism is required.

I also believe that the attention to the smallest details, in order to avoid slipping, brings the monks to a higher consciousness. Such clear consciousness is required in this sort of practice.

Furthermore, based on the Sutra with Bhadali, I can say that the Buddha does not consider himself to be a god. When he explains to Bhadali why one must follow the teacher’s path, he mentions groups of people/beings who reprimand/scold the disciple, or not. First he talks of the teacher as a reference to himself (the Buddha), second he talks of the monks, and third the gods- the Buddha himself is not among them.

I believe that the Buddha is the Buddha- a single phenomenon- neither man nor god.

In the Sutra in Kitagiri the Buddha also declares he does not eat at night and emphasizes the advantages.

He asks the bhikkhus to do the same.

Like Bhadali two bhikkhus (Assaji and Punabbasukka) appear here as well, refusing to do so. They claim to eat at night and still enjoy the benefits the Buddha enjoys, therefore they do not understand why they must suffer and stop eating at night.

The Buddha explains that since he himself abstained from indulging certain desires, he was able to reach enlightenment and know the truth.

His main argumens is that only because he experienced all he preaches to, he can truly preach. Thus, the bhikkhus must adhere to him.

One can learn from this verse of the way the Buddha sees himself- there is even a sense of superiority over other teachers.

It is implied that he is the wisest person who can see things clearly as he has no attachment to the material. Further on there is detail of the teacher-disciple relationship: “The blessed one is the teacher, I am the student, the blessed one knows, I do not” (verse 27).

Meaning, there is complete dichotomy where it is apparent that the Buddha is superior and established in the knowledge of the absolute.

In summation, the Buddha comes across (in my opinion) as a teacher and educator based in his own knowledge (from experience) who wants to pass on the knowledge to whoever wants to learn.

The Buddha is not a god, he lives in the here and now, in the physical world, in awareness and non-attachment to the material.

He teaches truth/one path and asks (demands) acceptance of his disciples, and at the same time expects them to find it out for themselves- through practice, repetition and thought.

Personally, I can connect to the way the Buddha teaches.

He comes across as a very authoritative teacher who is confident in his words, yet he does not force his knowledge on his disciples.

When he demands a certain way of acting he specifies the reason.

Similarly, I was “educated” by my teacher.

During the time of my studies to become a yoga teacher (the process is still going on, as I believe no learning ever truly ends…) I stayed at a practice center for a long time.

All through this period of time my teacher, who accompanied the group I was part of, taught us the Advaita Vedānta philosophy and the methods of yogi practice.

For him, this was the one and only truth- he had experienced it and believed in what he taught.

Most students accepted his words, but naturally there were those who disagreed and challenged his teaching.

Shankara, my teacher, knew how to answer every question and bring everyone, even the greatest sceptics, to a place where they could experience the answers to their questions for themselves.

He would do it in the most simple and pleasant manner. One might say he spoke to us eye to eye.

This might be the greatest difference I see between the Buddha’s teaching and the teaching I absorbed from my teacher (I refer to the method of teaching, not the doctrine itself).

For Shankara, the only difference between us and him was that he had found the path before us, that was all.

In my opinion this is a question too big to be asked.

Life itself is an experience of the path.

Maybe the right place is where we allow ourselves to contain all theories and answers, without having to choose one, since each way has in it something beautiful and true. One can simply take a little from each and turn it into their own, no?