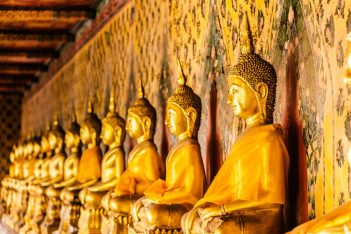 Course name: “The beginning of Buddhism”

During the 3rd century king Ashoka rules the Indian empire, which unites many principalities under one main sovereignty. The king, known to persecute Buddhists, converts and becomes a monk himself.

Possibly due to this the monk laws written during his time were so strict and uncompromising.

Under his ruling a third Buddhist council gathers and witnesses a splitting within the camp. The disputes are mainly between the conservative and liberal stream on behavioral-disciplinary matters.

The sangha community, one of the three Buddhist jems (along with Buddha and Dharma) evolves first as an elite group. Those who build it and belong to it are different groups of monks who leave the inclusive, productive life for a life of asceticism. These monks seclude themselves in a kind of “wondering community” monastery, which is built democratically to some degree. The abbot is selected by the other monks. In the monastery, to which children are also accepted, there is an initiation period of 10 to 20 years.

The monks’ discipline: they have about 200 duties (the nuns have about 300) and they perform services once a fortnight. During the services they chant the Vinayas (ordinances) and confess their sins and forbidden thoughts. These confessions are meant to train the monk to progress, they do not necessarily mean “punishment” in the traditional way. Oftentimes they do result in punishment in the form of banishment from the monastery and becoming “lay”, a simple Buddhist who will not reach nirvana.

The simple Buddhist has five duties: not to murder, not to steal, not to lie, not to take stimulants and to feed the monks. This food usually means a bowl of rice which the monks consume once daily, before midday.

The monastic Buddhism’s belief includes the concept of community, not in the sense of exclusiveness, but a more basic elitism derived from the assumption that not everyone is capable of understanding. The Sangha monks must understand themselves, individually.

Hence, the liberation is not collective – each is an island to himself and his experience is his own.

This is another reason, in my opinion, that the rules are very strict in matters of clothing, food, sexual contact etc.

The monk must be completely focused on his spiritual practice. Aside from studying and practicing he must not engage in anything, not even in thought.

Patimokkha- the collection of rules, as is the entire Pāli Canon, was written in a very dry, didactic and poor manner, as befits the spirit of its contents.

The Vinaya’s outline is one of yogi, ascetic way- far  beyond the intense abandonment of familiar life as we know. A very basic and prominent forbiddance is that of touching women- many rules circulate around this issue and approach it from different angles. All in order to eliminate any mental activity that creates suffering.

The general idea, in my opinion, is to create a very strong discipline of practice that brings a monk to greater heights when all his activities are done meditatively.

Once there is very little confusion there is room for silence and introspection. The spiritual work in such a case is much more effective and the monk can progress peacefully in his path.